Whilst exercising in the countryside close to Little Neston, Ness and Leahurst (located in south Wirral, Cheshire) Phil Putwain has been undertaking a survey of native common bluebell (Hyacinthoides non-scripta). The hedgerow flora has many populations of bluebell that occur along ancient tracks (green lanes some of which are hollow ways) in this area. Bluebell has also colonised woodland that has regenerated on the site of old marl pits last utilised in the late 19th century. What better way to make the daily perambulation more than just a physical exercise? 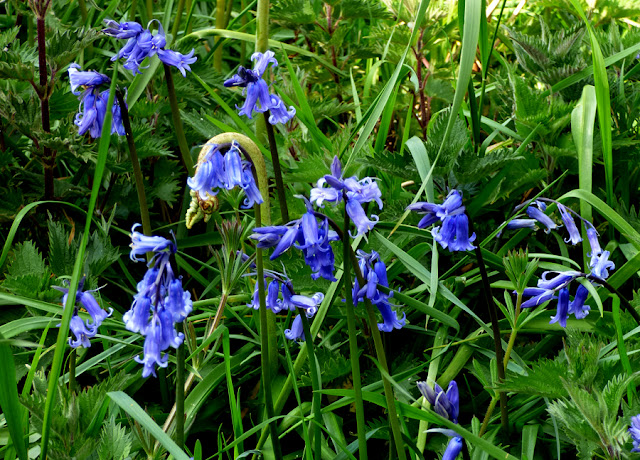 - May 05, 2020
Email ThisBlogThis!Share to TwitterShare to FacebookShare to Pinterest 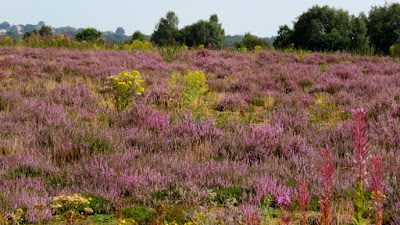 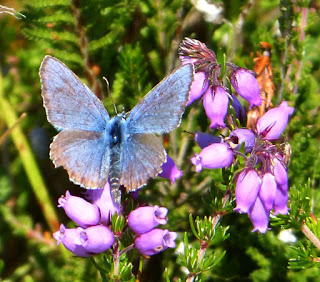 Extensive heathland creation (and ongoing ecosystem development) at Prees Heath commenced in 2007 and in 2020 circa 15ha of valuable heathland habitat has developed for supporting the only remaining population of silver studded blue butterfly in the English Midlands. An area of acid grassland adjacent to created heathland has not been colonised by Calluna vulgaris and Erica cinerea despite being unmanaged for about 25 years since the area was last cultivated as arable cropland.


The aim of the experiment was to test whether heathland dwarf shrubs can be established as a result of removing a thin layer of vegetation (mean depth 116mm) and sowing seed of Calluna vulgaris or Erica cinerea. There were seven treatments including control, that included exclusion of rabbit grazing (using chicken wire) and addition of seed or not. Plot size was 5m x 2.5m and they were physically created in November 2019, seed was sown on 8th January 2020. It is intended that records will be made of species establishment and long-term assembly of heathland species, for many years. If successful, the habitat resource for silver studded blue will be expanded even further.

- March 28, 2020
Email ThisBlogThis!Share to TwitterShare to FacebookShare to Pinterest

Ecological Restoration Solutions (UK) in collaboration with TEP Ltd. has been commissioned to undertake an assessment of soils on a new electrical converter station site in Lincolnshire. The soil assessment will cover access roads, site compounds and the converter station footprint. Direct current (DC) electricity will enter the site by underground cable and will be converted to alternating  current (AC). 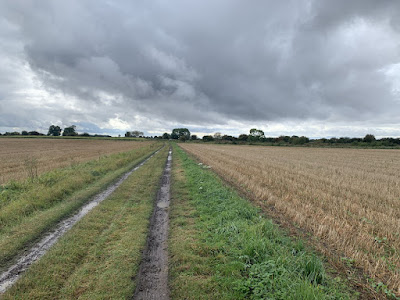 This will feed into the National Grid providing sufficient electricity to supply 1.4 million households. Based on soil properties, proposals are made for creating new landscapes (woodland and grassland) and treating land restored to agricultural cropping.
- January 08, 2020
Email ThisBlogThis!Share to TwitterShare to FacebookShare to Pinterest

Work on the restoration scheme for Divet Hill Quarry in Northumberland, designed for CEMEX by Dr Phil Putwain, ERS (UK) in collaboration with Elaina Kurs at Stephenson Halliday (Kendal)   contributed to the winner’s award within the Planned Restoration category of the Mineral Planning Association’s annual Quarries and Nature event. The restoration scheme involved the creation of Whin grassland on areas of raw dolerite rock left after the cessation of mineral extraction.


- October 28, 2019
Email ThisBlogThis!Share to TwitterShare to FacebookShare to Pinterest

RSPB-United Utilities’ Dove Stone Partnership began in 2010, building on the work of UU’ Sustainable Catchment Management Programme (SCaMP 2005-2010). It is a partnership between a water company and a conservation charity with shared aims to improve the site for biodiversity, water quality and people. 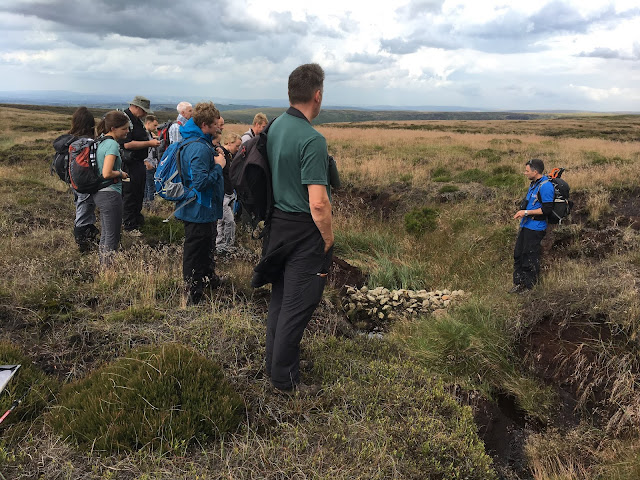 The 4,000ha site, in the north-west of the Peak District National Park includes 2,500ha of peatland and a fringe of heath and grassland. It is of European importance, part of the South Pennine Moors SPA/SAC, with designated features including blanket bog and associated moorland habitat and birds like Golden Plover, Curlew, Dunlin and Short-eared Owl.

An enthusiastic and knowledgeable group of professional ecologists undertook a 5 hour walk up onto the blanket bog plateau looking at a range of peatland restoration work, including re-vegetating bare peat, raising water tables and reducing erosion by a number of techniques (stone, heather and plastic piling dams). We also examined the Sphagnum restoration process, bringing back this important component of blanket bog. Formerly eroding peatland has begun to become a wetland again. We discussed the benefits that this can bring for a number of eco-system services. We discussed wildfire risk and mitigation, and the opportunities and challenges that conservation and wider upland land management might face in the future.

- September 07, 2019
Email ThisBlogThis!Share to TwitterShare to FacebookShare to Pinterest 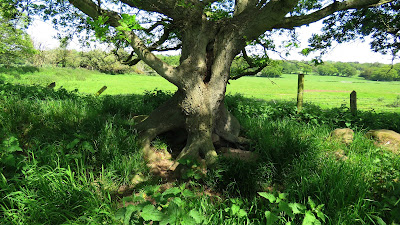 Ecological Restoration Solutions has been undertaking an extensive Phase 1 Habitiat Survey over more than 100ha of farmland in Wirral.

Many old field boundaries and ponds (previously Marl Pits) that are shown on 1840's Tithe Maps are still in evidence today. 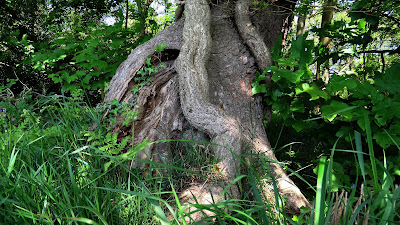 This turned out to have been a very enlightening rediscovery of hidden areas in Wirral.

- June 18, 2019
Email ThisBlogThis!Share to TwitterShare to FacebookShare to Pinterest 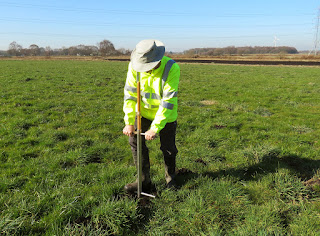 Ecological Restoration Solutions has recently undertaken a survey of two contrasting areas of land adjacent to an industrial site. The aim was to determine the potential soil contamination by inorganic and organic chemical toxins. Twenty eight soil samples were collected and subsequently analysed by a UKAS accredited laboratory for a suite of phytotoxic and zootoxic metals and the metalloid arsenic and also a range of potential organic contaminants including the list of EPA 16 PAH’s and extractable petroleum hydrocarbons. The two areas of land were uncontaminated (usually well below upper threshold values) with respect to all metals and organic compounds tested.
- April 10, 2019
Email ThisBlogThis!Share to TwitterShare to FacebookShare to Pinterest
Older Posts Home
Subscribe to: Posts (Atom)

Whilst exercising in the countryside close to Little Neston, Ness and Leahurst (located in south Wirral, Cheshire) Phil Putwain has been und...